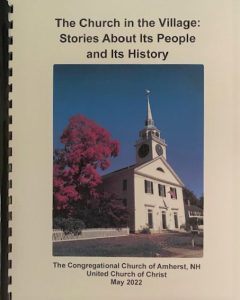 This 113 page booklet of Spire articles written by church historian Anne Krantz, is full of fascinating church history, photos, and related stories. It was previewed at Annual Meeting on May 15th, 2022 and while supplies last, is available for purchase, for $15 per booklet. Please contact Kay Steeves or Sue Spiess for availability.

Preservation of the Oldest Steeple in New Hampshire

The tower and steeple of the Amherst meetinghouse is the oldest and perhaps the tallest in NH. It is certainly one of the most handsomely designed, with its pleasing proportions and detailing. It is composed of more elements than most: the large square clock tower, the octagonal arcaded belfry, a domed belfry roof, a lantern level, a spire, a finial, and a large weather cock. It soars above Amherst. The square tower platform enclosed by a balustrade is about 60 feet above ground level, and to the top of the weathervane is about 110 feet.

The tower and steeple attached to the second meetinghouse have survived virtually unchanged since the building was raised on the Common in 1771 and dedicated on January 18, 1774. Inspired by becoming the shire town for Hillsborough County in 1769, the town anticipated a population surge and the need for a huge meetinghouse. They contracted for one 45 feet wide and 70 feet long, with a porch containing a staircase at one end and the tower and steeple at the other. The town voted to proceed with the project, after due discussion on October 4, 1770.

Construction of the 2nd Meetinghouse

Post and beam construction permitted huge interior open spaces with no interior supports. The six roof trusses and the two gable ends hold up the eight 45-foot-long ceiling tie beams that connect to the side plates. This construction was only possible because virgin timber could still be found in the local woodlands. Slow-growing and thus dense white pine and white oak were harvested and hewed for the critical load-bearing posts and beams, and for the hundreds of additional timbers required. The first task of Amherst deacon and master builder Ephraim Baker was to locate in the surrounding forests these vital timbers for the posts, and the four 70-foot-long plates and sills. Jonathan Nute, former Hillsborough County Forester, estimated that they would need to find straight white oaks about 150 feet tall to get such long timbers. Imagine trees 50 feet taller that the steeple.

Timber for the Meetinghouse and Tower

The trees were likely hewn on site by removing about half the wood of the tree when hewing it into a square beam. Transporting these monster 70-foot logs weighing tons, from the forest to the site was done in the winter when the ground was icy and oxen and dragging sleds could be used. Nevertheless, it seems impossible. Eva Speare, author of Colonial Meeting-Houses of NH, 1938, explains that a cubic foot of dry white oak weighs 48 pounds and that green oak weighs 64 pounds.

Unbelievably, the timbers were hewn, the trusses prefabricated, and the frame was ready to be raised on August 26, 1771. The wood was still fairly green. Posts and beams 12 or 13 inches square were used, and a single beam could weigh four to five thousand pounds. Furthermore, all this weight precariously balances on the four posts and all the framing was held together with mortise and tenon joints and wooden pegs. Great skill was required to make the mortises, the rectangular holes or pockets that receive the tenon, as these naturally weaken the beams. How did they ever raise the frame, and how did they ever get the six tie beams in place, not to mention jack up the six trusses, which could weigh 10,000 pounds each? The tower is constructed of four 13 inches square oak posts 50 feet tall and nearly two tons each. Having the tall tower posts at one end probably was helpful in hauling up beams, but no records remain, and exact techniques are unknown. But as Pastor J. G. Davis said in his Historical Discourse delivered at the Hundredth Anniversary of the meetinghouse: “Each age gathers wisdom from the labors and researchers of the preceding age….One of the most important uses of historical discourse… is, to teach us what we owe the past, to bring to mind the conditions of hardship and toil, the enterprise and patient industry by which our present prosperity is attained.”

Church and Town Separate in 1832

In 1832 according to a change in NH statues, the Amherst town church separated from the local government. The town retained ownership of the clock tower, the bell, and thus the steeple and weathercock, but the meetinghouse was sold at auction to the high bidder, the Congregational Church and Society. The new meetinghouse owners had to permit access to the clock tower and belfry, and promise to keep the building in good repair, or it would revert back to the town.

Church Moves Meetinghouse off the Common in 1836

The new church owners had to move the entire structure off the town common onto private land. It was miraculously pivoted and moved by oxen from the Common to its present site in 1836. As a part of this gigantic reconstruction project the building was modernized with a new façade. While the rear porch staircase was eliminated (sold), the front tower was enclosed by its present flat front with an internal staircase to the sanctuary. The meetinghouse was raised up 8 to 10 feet onto a higher foundation to allow space for the vestry below the sanctuary. This large room was for town use for meetings and public events. The Amherst Lyceum engaged Henry David Thoreau to speak ‘in the basement’ on a bitter cold night in December 1856. They charged 10 cents per person to pay Mr. Thoreau. In his diary Mr. Thoreau describes nearly freezing while driving a sleigh to Amherst. He did not do much more public speaking after this adventure.

The original Thomas Woolson clock has served Amherst since about 1815. Woolson came to Amherst, where he received all his schooling, when he was six and lived here for about 25 years. He apparently was an intuitive mechanical genius. The town contracted with him to design the clock, and it was built here with the assistance of local craftsman Luther Elliott. The town encountered difficulty in making the final payments, and not until there was a vote to sell the clock unless it was paid off was money found. The final payment was made in 1819. In an Amherst library book, Early American Clock Towers, Fred Shelly notes that "Woolson’s clock has managed to survive hand-wound and still running to this day, both time and strike.” We can be grateful for the talent of Tenney Clough who personally kept this incredible antique clock wound and running for 28 years from 1972 to 2000. (Tenney died in 2005 at age 89.) It takes strength to turn the crank to lift the huge 400- and 600-pound weights that go up and down inside the exterior walls.

The first bell for the belfry didn’t get approved and installed until 1794, and it cracked shortly thereafter. The second and third bells also cracked, and not until the fourth bell was installed in 1839 in the newly located tower, did the persevering community hear a bell to cheer about.

The finial, the decorative piece at the top of the steeple supporting the weathercock, is the original virgin spruce wood one. The rooster weathervane is also the 1774 original, and obviously was made to last. Most of the tower and steeple are original and at this point held together mainly by the many layers of paint. Originally the meetinghouse was not painted, as paint was too expensive. Later, when towns could afford to paint their meetinghouses, New Englanders used color such as dull yellows, salmon, etc., with the contrasting colors for the trim. The white look didn’t arrive until the Greek revival day in the 1830s.

The tower was rebuilt by the town in 2000, when much of the original spruce wood was replaced, including the finial with the round ball on top. The weathervane is original to the 1774 meetinghouse.

Music in our church during the 18th and early 19th century was primarily choral, accompanied now and then by stringed instruments. The first record of the church obtaining an organ is 1830, when John Prentiss purchased one that his wife played during service. Aaron Lawrence, a deacon and man of means in town, helped to purchase a new organ for $1000 from Hook Co. of Boston in 1864. A third organ was purchased from G.H. Ryder of Boston in 1873 and used for the first time in the centennial celebration of 1874. That organ continued in use until replaced by the current Johnson Tracker Organ that arrived in town in 1961 and was installed in the church in January 1963. It is one of fewer than 200 Johnson tracker organs that remain in use.

Can’t We All Just Get Along?